Could A Resident-Owned Co-Op Like This One Save Your Community?

As Americans, we’ve grown used to living in a free country. In fact, we may count things like self-representation as just facts of life because they are so normal to us. However, mobile home park residents may not think of self-representation as something that affects their housing choice too much. But what if a mobile home park was owned and managed by a co-op instead of by a single owner (or a family or a company)? 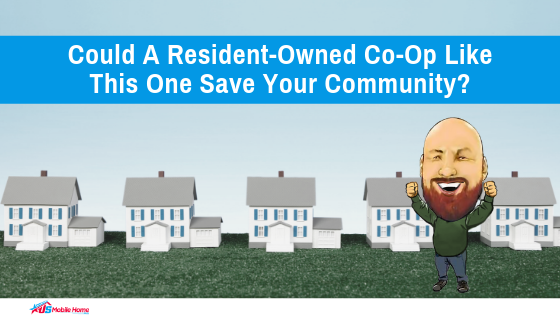 Perhaps this is an intriguing idea to you. Could a mobile home co-op provide a better living experience for you and for the other residents in your mobile home park? Happily, a mobile home park co-op is not a new idea. So you won’t have to completely reinvent the wheel.

Enter the Longmont Mobile Home Park in Colorado. Residents are working to purchase their mobile home park and turn it into a co-op. And they have help. Not just in the form of a multimillion-dollar loan, but also in assistance from the city of Longmont which agreed to loan them $300,000, according to the Times-Call. Take a moment to read the full story.

And Longmont Mobile Home Park residents aren’t the only ones. For instance, there’s also this co-op in Minnesota. We’re even including a link to one non-profit’s list of communities below. So, keep reading.

What are some factors that could lead you to seek out a co-op? Obviously, different factors could be at play in different situations, but let’s take a minute to talk about three possible ones here.

Living in a mobile home park isn’t free. In fact, you’re probably well aware of having to pay lot rent. Likely, it’s an expense that you know simply comes with living in the mobile home park you choose.

Thus, you already accept it as a cost of living in your park. But what happens when your park owner raises your lot rent unexpectedly? Maybe you’ve experienced this yourself. If so, you may have found it a frustrating turn of events.

If you’re already just making ends meet or living on a shoestring budget, having to pay extra for the spot your mobile home is on could be difficult. And if you felt like the change was arbitrary and unexpected, that probably didn’t help either. For those who like to plan, it would seem hard to know how to plan when you don’t know what to expect.

That could be one appeal of a mobile home park co-operative. Having decisions made by a group instead of by one person could put a check in the process of raising lot rent. Plus, if the people making the decisions have a stake in the process, that could also help. Now, that’s not to say that lot rents will never be raised in a co-op situation.

In fact, if you read the story about Longmont Mobile Home Park, you know that they did not anticipate their lot rent would always stay the same. Actually, they were even prepared for an initial jump in price as they changed to a co-op. But still, you may prefer to have lot rent raised (if it needs to be raised) by the agreement of a collective group than by a single owner.

As a side note, keep in mind that if your park owner raises your lot rent, you may be able to launch an effective gentle protest. Check out what residents of a New York community did in response to a large proposed lot rent hike.

Another thing that could draw you to a co-op is the possibility of having more say about the rules and regulations. Maybe you (and other residents) would like some more freedom when it comes to lawn upkeep. On the flip side, maybe you’re looking to impose a little more structure than you currently have. Either way, you’re hoping that a co-op could give you more say in the do’s and don’ts for your community.

At the same time, keep in mind that a co-op is not necessarily a “fix-all.” Of course, you’ll have to work with others in the community and everyone may not see eye to eye. In short, having a co-op does not guarantee you’ll always get your way. You may need some flexibility—some give and take as you work with others.

What else could make a co-op seem attractive? Well, perhaps for some it could be the alternative. With the possibility of developers taking down mobile home parks, a co-op could be attractive if you’re concerned your park is at risk of being sold and turned into something else.

If you’re intrigued by the possibilities here for your own mobile home park, check out ROC USA, “a non-profit social venture scaling resident ownership of manufactured home communities since 2008.” And if you want to be inspired that you’re not alone, check out their list of communities.

Also, consider taking some time to chat with other residents of your mobile home park. Do they share similar concerns or frustrations that they’d like to remedy? Possibly, they’ve already considered a co-op themselves, so maybe they’ll have some thoughts to share.

And don’t forget that when dealing closely with others for projects like this, you may run into some frustrations. While you may not always agree with someone else’s perspective, be kind and polite anyway. And if you’re thinking about moving into an already-existing mobile home park co-op, check out our 5 Things You Need To Do Before Moving Into A Mobile Home Park.